Rehema and her new baby 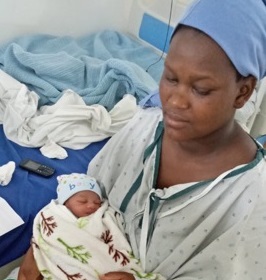 Rehema is 25 years old.  She is married with two children.  Remema worked at a small hotel so that she could afford to buy food.  The hotel was troublesome, and the owner believed that Rehema was earning too much money.  So, he told her to leave her job.

Rehema then became pregnant with her second child.  She attended her local clinic for the first trimester.  However, she did not like how patients were treated there, so she decided to come to Kivulini Maternity Centre, Maternity Africa’s hospital.  She was well cared for there. When the day arrived for her to have her baby she felt some labour pains and asked her husband to bring her to the Centre.

When Rehema arrived at the Centre to have her baby, she was welcomed by the nurses.  She experienced pain for three days, and, on testing it appeared that her baby was in an awkward position.

Rehema underwent surgery and gave birth to a healthy baby.  She thanked the Maternity Africa doctors, because it had been very difficult for her, and she was grateful for the good care she and her baby received from Maternity Africa.

If you would like to help Maternity Africa to make childbirth safe for more people, please follow the link below.  Thank you.