Serena was a young Masai girl who came to us at Selian just before New Year this year. She was feverish and barely lucid, had to be assisted to walk. The other patients in the ward recoiled from her, moving their beds away, as aside from the familiar fistula smell of urine and faeces there was also the stench of rotting dead tissue coming from within her. She was not more the 15 years old and the man with her said he was the brother of her husband. She had delivered a dead child a week prior after a difficult two day labour at home in her village. Eventually the family took her to the nearest hospital who sent her straight to Selian. It was too early to operate on her to correct her fistula, and the damage done was some of the worst the doctors had ever seen. First of all Serena needed antibiotics to treat the raging infection, a blood transfusion to replace the blood she had lost, good food to build her up, and physiotherapy to rehabilitate her damaged legs. Serena has stayed with us on and off for the last seven months enduring four difficult operations often reluctant to go home in between surgeries as she was ashamed to return before she was completely healed. At Selian she slowly came out of her shell responding to the treatment, especially the warm empathetic care of the nurses. She has learnt to speak Swahili, and has been extremely supportive and encouraging to new patients. It has been touching to see how attentive her husband (not really the brother of her husband!) has been with her, his main goal has been to get her well, even inquiring of us if there is some form of family planning she can take to prevent this from happening again. This is quite unusual in this culture as if a woman is unable to have a child she is often discarded by the husband. It has been a miracle and Friday was a joyous day as Serena went home, dry and smiling determined to become an ambassador to other women to come and receive treatment. 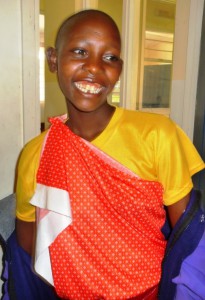